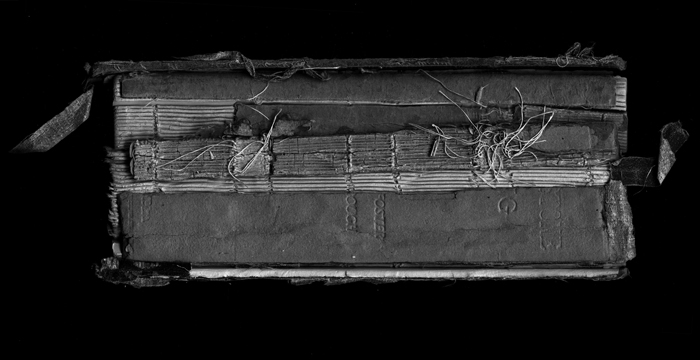 "I recalled the voice I had heard; again I questioned whence it came, as vainly as before: it seemed in me-not in the external world. I asked, was it a mere nervous impression-a delusion? I could not conceive or believe: it was more like an inspiration. The wondrous shock of feeling had come like the earthquake which shook the foundations of Paul and Silas's prison: it had opened the doors of the soul's cell, and loosed its bands-it had wakened it out of its sleep, whence it sprang trembling, listening, aghast; then vibrated thrice a cry on my startled ear, an din my quaking heart, and through my spirit; which neither feared nor shook, but exulted as if in joy over the success of one effort it had been privileged to make, independent of the cumbrous body."

This exhibition brings together works that evoke or are driven by instability, fragility and processes of creative and destructive forces that are intimately intertwined. Unstable Ground addresses various notions of instability through aspects of works by Robin Cameron, Sarah Ciurysek, Kate Davis, Emily Jones and Dan Siney. Using the book as a structure, source or trope that is destabilized through some gesture of their process, each of the works embodies transitional states and relies in some way on the movement across formats, mediums and modalities. In this way the book acts as both bridge and rupture.

Unstable Ground was accompanied by a book co-published with Publication Studio Vancouver.

The initial impetus from this exhibition developed from trying to conflate tectonic processes with the analog book. These forces and forms - printed matter and seismic activity, moments of extraordinary perceptual access, and the subsequent potentialities of disruption they provide reveal certain inescapable phenomenological qualities of the physical world and information. Additionally these forces are capable of affecting human responses such as disappointment, belief, expectation, nostalgia, fear and hope.

Robin Cameron is currently completing her MFA at Columbia University in New York. She completed her BFA at Emily Carr in 2004. She has shown her work in Vancouver, Toronto, Seattle, Chicago, Philadelphia, Mexico, New York, California, Zurich and Tokyo.

Sarah Ciurysek completed her MFA at Concordia University and her BFA at Emily Carr University and Parsons The New School for Design. Sarah has exhibited her photography and video installation work across Canada and is currently preparing for a show in England through Radar. She teaches at Emily Carr and at the University of the Fraser Valley.

Kate Davis completed her BA (Hons) Printmaking in 2000 and an MPhil in Art in Organisational Contexts in 2001 at Glasgow School of Art where she now works as a part-time lecturer. Davis has presented solo shows at Museo de la Ciudad and La Galeria de Comercio, Mexico; Kunsthalle, Basel; Galerie Kamm, Berlin and was selected for Art Now, Tate Britain, London in 2007.

Dan Siney completed his BFA in photography at Emily Carr in 2003. He is represented by the LES Gallery and has show in Presentation House Gallery in Vancouver and in exhibitions in London, Paris, Mexico City, New York, Barcelona, San Francisco and Tokyo. 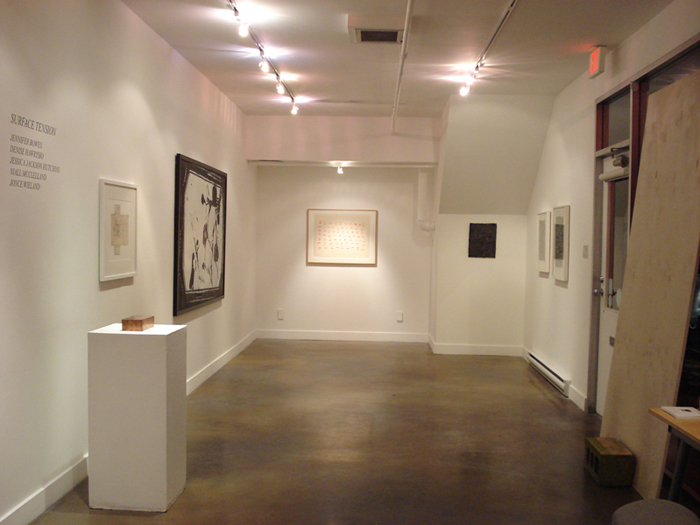 Malaspina Printmakers is pleased to present Surface Tension. Each of the artists included in the exhibition manipulates or alters the surface of various objects and materials through subtle gestures or performative acts. The prints remain as a trace of an interaction with a material surface, indexicaly tied to the means of its production. The works in included in the exhibition demonstrate a formal economy of process and form; whether labour intensive or deliberately performative to the extent of seeming immediacy.

Jennifer Bowes, based in Northern BC, makes collograph plates that are constructed through repetitively winding and tying small units of materials until they form a densely woven surface from which she is able to print a near-photographic impression of the textured mass of material.

Denise Hawrysio is a London-based artist who uses intaglio plates to record the markings of processes and the traces of being in and moving through the world.

Jessica Jackson Hutchins, recently featured in the 2010 Whitney Biennial, prints the surface of a dining table marked and used in her sculpture.

Niall McClelland, based in Toronto, creates large-scale abstract prints that employ architectural or found objects to as stencils.

Joyce Wieland's seminal print "Oh Canada" was made by pressing her lipstick coated lips onto a lithography stone while singing the national anthem. 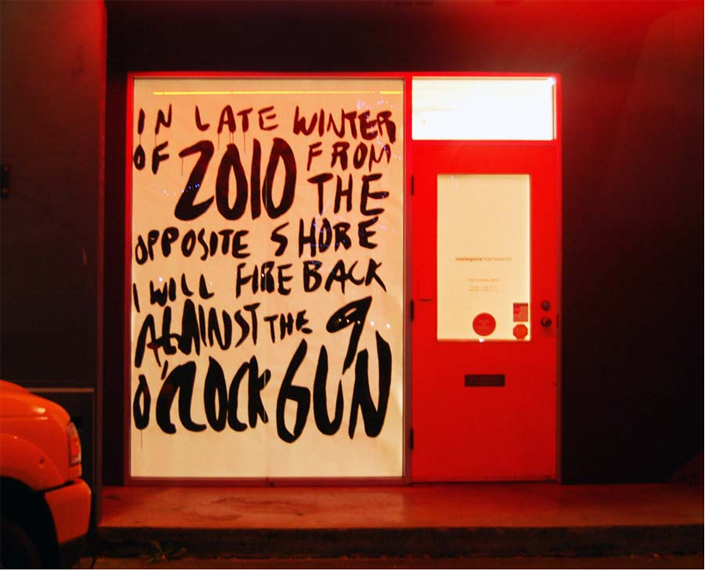 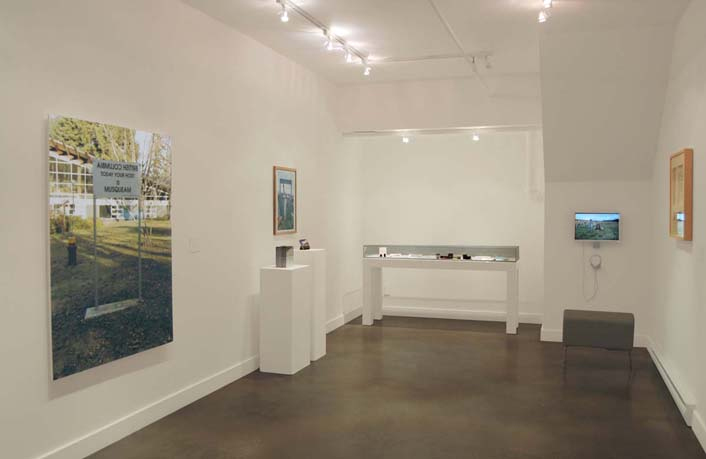 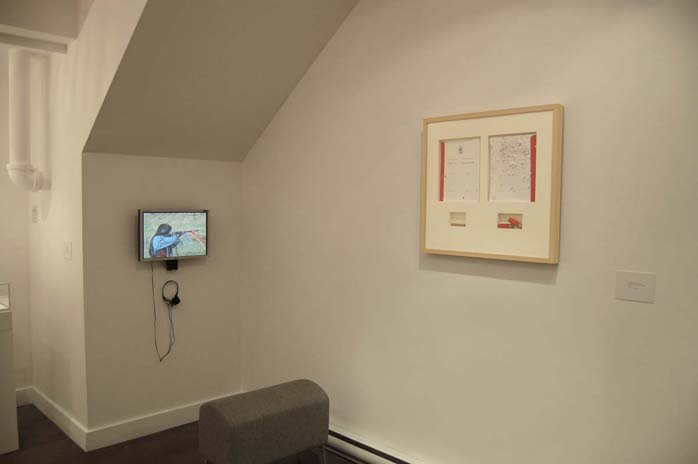 Make It Strange, is an exhibition of works that de-familiarize our conventional relationship to print media. Through the fabrication or manipulation of signs, posters, official legal documents, rubber stamps and altered printed ephemera, the works in the exhibition disrupt our conventional perception of, and relation to these modes of communication. Each of the pieces exhibited alludes to ways in which print mediates our relationship to place and offers alternative ways of connecting to and experiencing the city, the nation or the distances between us. Make It Strange is intended to raise questions about how we perceive and relate to print in our daily lives, the power it has to structure our experience and at the same time present propositions for interaction with the medium.

Michael Drebert is currently completing an MFA at the University of Victoria. His work has been included in exhibitions at Artspeak, Contemporary Art Gallery, Ministry of Casual Living, Helen Pitt Gallery, the Western Front, Lobby Gallery and Blanket Gallery among others.

Edgar Heap of Birds' exhibition record includes The Museum of Modern Art, Whitney Museum of American Art, The National Museum of the American Indian, Smithsonian Institute, The National Gallery of Canada, Documenta 8, and the Venice Biennale. He was awarded an Honorary PhD in Fine Arts from the Massachusetts College of Art and Design.

Vanessa Kwan has exhibited at the Or Gallery, Art Gallery of the South Okanagan, Access Gallery, Helen Pitt Gallery and Richmond Art Gallery. She has also produced work in public spaces including the Olympic and Paralympic Public Art Program and is a founding member of the Norma arts collective.

Together, Michael Morris and Vincent Trasov founded Image Bank in 1969 as a conceptual vehicle for mail art projects, which featured collaborations with Eric Metcalfe, Gary Lee Nova, Ray Johnson, General Idea, Robert Filliou and many others. They co-founded the Western Front Society in 1973 and their works, both collaborative and individual are included in numerous important national and international exhibitions and collections. Morris was awarded an Honorary Doctorate of Humanities by Emily Carr University of Art + Design. Trasov was selected by the Vancouver Sun as one of the top one hundred British Columbians who shaped the province over the past century.

Lawrence Paul Yuxweluptun's work has been included in numerous international exhibitions, such as INDIGENA: Contemporary Native Perspectives, and at the National Gallery of Canada, the Smithsonian Institute, grunt gallery, the Western Front and the Vancouver Art Gallery. He was the recipient of the Vancouver Institute for the Visual Arts (VIVA) award in 1998.